How Games Can Recruit The Right Employees: Pizza Hero by Domino’s

How Games Can Recruit The Right Employees: Pizza Hero, by Domino’s

In 2011, Domino’s launched the Pizza Hero app. On the surface, it appeared to be a pizza-making game where users could knead dough, spread sauce and toppings and slice their pizzas — all useful in actually making a pizza. Users could then order the pizzas that they had made when they visit Domino’s outlets. While successful in generating pizza sales, Domino’s also used Pizza Hero to recruit pizza chefs. 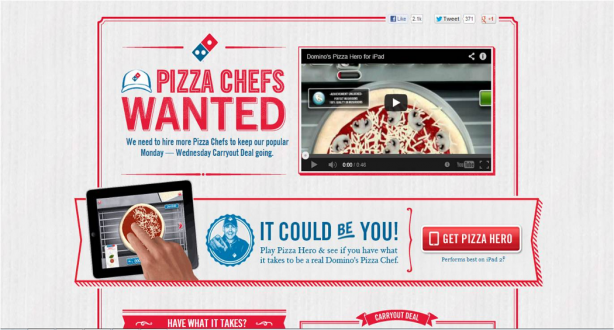 Behind a cute pizza making game, Domino’s was gamifying its recruitment process — Particularly skilled players were given an invitation to come into their local Domino’s for a job interview. By implementing a game that players could repeatedly work at and improve, Domino’s created an innovative and novel way to educate potential candidates of their process. This way, people who came in via Pizza Hero had already demonstrated a conceptual understanding of what makes good pizza, which would get them a head start on on-job training. More importantly, the job interview was only extended to the user upon reaching a certain number of points, which were distributed based on the player’s performance in different stages of the pizza-making process.

As humans, we’re all hardwired to view tasks as games and success as achievement. In that sense, Pizza Hero’s job interview being locked behind a high point threshold made it a goal to work towards, almost a badge of honor for the ardent gamer. It also sent the message that these people were being invited because of their high competency. By gamifying the open-call process for talent recruitment, Domino’s succeeded in attracting qualified candidates in an industry that may not have been viewed as the most glamorous of jobs.

We could also use such games to attract talent across a multitude of industries. Aside from testing for basic competencies such as deductive reasoning, empathy and eye for details, such games also test the player’s tenacity and willingness to learn and improve, which are all desired skills for the workplace. This doesn’t just apply to pizza-making; a game designed to “spot the suspicious entry” might be good for auditors, we could build a mission-based problem-solving game for potential management consultants, or an investment simulation game for potential investors and traders.

With games, the sky’s the limit and the world’s our oyster!